Welcome to the Web site of the Buckinghamshire unit for the 2011 World Scout Jamboree in Sweden.

Hopefully the site should give you a bit more information about Jamborees, the Jamboree in Sweden, and the unit.

see our Photos to see pictures of the 2011unit in action

We are also known as B.U.G.S (Bucks Unit Goes to Sweden ) and this is our logo 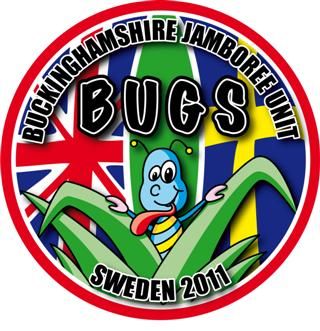 What is a Jamboree?

A Jamboree is the name given to an international camp for Scouts and Guides. Every 4 Years, there is a World Scout Jamboree where Scouts and Guides from almost every Country in the world meet to learn about each others lives & cultures and take part in a wide variety or activities. It is often described and a sort of Scouting Olympics with out the competition, but it is an event that has more participants than an Olympic games.

Scouting Started in 1907 and soon started to spread across the world with great success. With its continuing international growth, BP saw a need for a gathering of representatives of Scouting from all around the world. The general aim was to foster a worldwide brotherhood, and to help the young boys in the movement learn about other peoples and nations by direct interaction with them.

It was not until after the first World war, in 1920 that the first World Scout Jamboree could be realized. It was held in the Olympia halls in Kensington, London. 8,000 Scouts from 34 countries attended the event, it was more like an exhibition than a camp.

Thereafter, a Jamboree has been held every four years. (with a couple of exceptions- WWII and in 1979 when the Jamboree, which was to be held in Iran, was cancelled due to the political upheaval in the region at that time).

The name is thought to be derived from the Swahili for hello, “jambo”, At the first world jamboree at Olympia in 1920, Lord Baden-Powell said “People give different meanings for this word, but from this year on, jamboree will take a specific meaning. It will be associated to the largest gathering of youth that ever took place.”

The 2007 Jamboree coincided with the Scouting Centenary celebrations. Because of this, the honour of hosting the event was again bestowed upon the United Kingdom, as the birthplace of Scouting. Over 40,000 young people camped in August at Hylands Park in Chelmsford, Essex. Hundreds of thousands of day visitors attended events in the south-east of England as part of the Jamboree.

The next World Scout Jamboree being held in Kristianstad, Sweden from 27 July to 7 August 2011. UK Scouting are planning to send 87 units (36 young people and 4 Leaders per unit) as well as service teams to represent the United Kingdom. They will join other young people (aged between 14 -17 at the time of the Jamboree) from around the world and will camp, live and work alongside each other for 10 days. They will come from homes as diverse as Africa and Europe, cultures as different as Arab and American countries. Together they will celebrate what unites them, and learn what they can do together to help build a better world. The theme is “Simply Scouting”. It will be an experience of a lifetime for all those lucky enough to be part of it

The Scout County of Buckinghamshire is sending a unit of 36 young People and 4 Leaders. The Young people are chosen from all areas of the county and will be spending a considerable amount of time in the coming months training and preparing for the Jamboree as well as raising the funds to go.